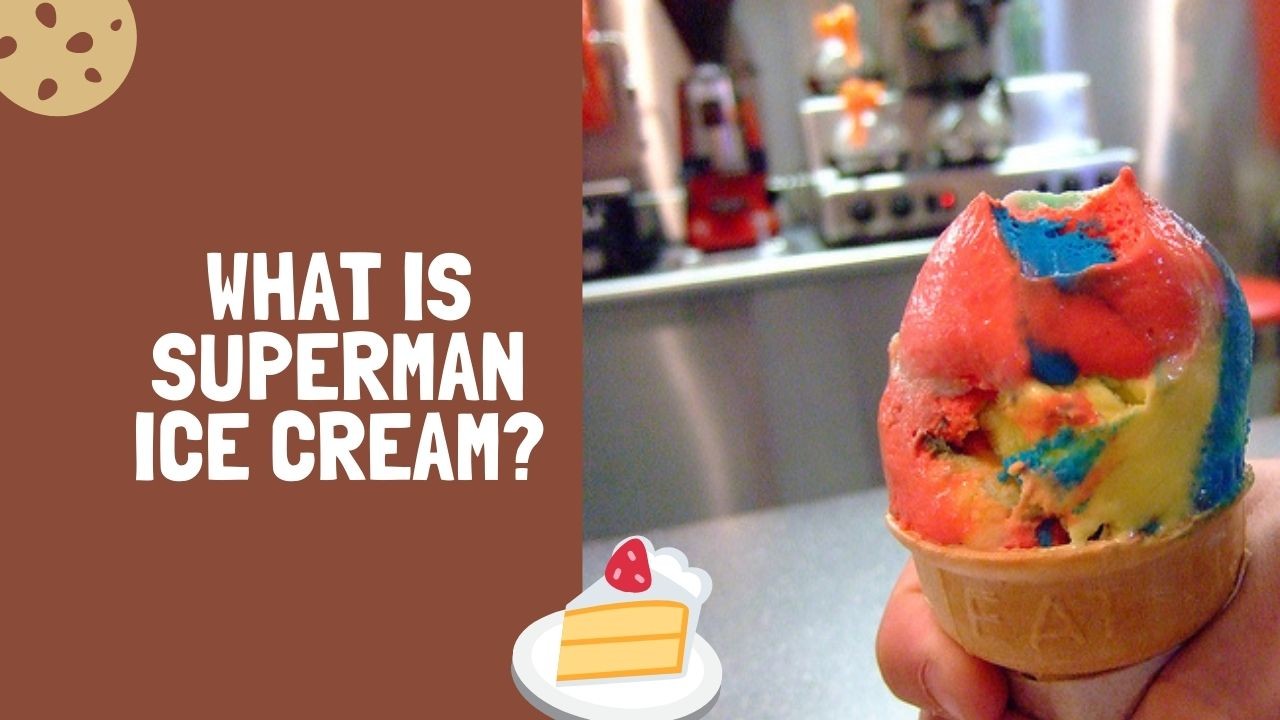 Superman Ice cream is said to have been created in a Detroit, Michigan brewery in the 1920s, during a time when alcohol was illegal. Once the ban on alcoholic beverages was lifted, the inventors continued to produce ice cream. Eventually, this part of the company was sold off and overtime Superman Ice Cream’s flavor profile changed as well as it’s well-known name in the Midwest.

Superman Ice Cream is an elusive flash from the past for many and a sought-after cold dessert of those across country. Let’s check the history, the array of colors, where you can find it, and how you can make it at home!

What is Superman Ice Cream?

Many are uncertain of what Superman Ice Cream is, but Midwesterners love it! Who would have thought an ice cream could have such an exciting history and only known in particular states.

What is Superman Ice Cream’s Origins?

Superman Ice Cream is said to have been born in the Midwest during a time when there was a restriction on alcohol. Many alcohol brewing companies searched for a way to stay afloat, to adjust to the changes. During these times is when the red, blue, and yellow flavored colors were birthed.

There was a nationwide constitutional ban on alcohol: There was an embargo on the sale, the production, and the transportation of spirits from 1920 to 1933, called prohibition.

The brewing company needed a way to restructure its company: With national the ban of alcohol hang outs, ice cream cafes became the rave for many. Julius Stroh decided to convert Stroh Brewery Company into a non-alcoholic product producing factory and Michigan sources say this included the production of Superman Ice Cream!

Do Each of the Colors in Superman Ice Cream Have Specific Flavors?

When the swirls of blue, red, and yellow are piled high on a cone or several mounds of this ice cream is scooped into a bowl. The exciting question comes to mind, what flavor is red? Then the next question pops, what flavor is blue? Certainly, yellow is plain old vanilla with drops of yellow dye, right? Distributors may decide to change the flavor profile, but the one constant will always be the traditional red, yellow, blue colors. Let’s explore the ever changing, slightly complex flavors of this ice cream!

The red flavor is more than red dye: The original Superman Ice Cream flavor Red pop is a Michigan sugary sweet strawberry soda by the brand Faygo. At times, instead of the red pop flavor, the red is switched to cherry.

The yellow color is usually just yellow color: While the original flavor was lemon, most yellow ice creams are a vanilla stand-in that is simply dyed yellow.

The blue moon flavor is an elusive mystery: The Michigan locals swear the turquoise blue colored ice cream tastes of marshmallows or almond extract. While others chime in with the taste being crushed fruity pebbles or Trix cereals. It could be chalked up to being the additive castoreum; a beaver musk. However, Milwaukee Petraran Products owns the patent to the original secret blue moon recipe. Leaving the exact flavor to stay a cold unsolved mystery.

How To Make Superman Ice Cream At Home?

You can defiantly enjoy Superman Ice Cream in the Midwest during any time of the year. If you’re not in that region check out this homemade no churn Superman Ice Cream recipe! This recipe sets up in the fridge overnight, and it takes about 30 minutes of prep time.

First create the sweetened condensed milk: Mix 3 eggs yolks with the 14 ounces of condensed milk in a saucepan. Over medium heat continuously stir the mixture with a wooden spoon for 7 to 10 minutes. Remove from heat after the allotted time, allow the mixture to return to room temperature then chill for 1 hour.

Create the yellow flavor and color: In another bowl, combine ¼ teaspoon of lemon pudding with the 2 teaspoons of strawberry banana jello then dissolve the mixture with boiling water. Allow to cool. After this mixture has cooled, fold 1/3 of the ice cream base into the jello mix. Then finally, add drops of yellow.

Create the blue flavor and color: In a separate bowl, fold in few drops of blue to 1/3 of the ice cream base. This is the “blue moon”.

Create the red flavor and color: For the cherry flavor, add red food coloring plus ¼ teaspoon of almond extract to 1/3 of the ice cream base to another bowl.

Organizing the colors, superman style:  In a 9×5 pan, alternate between using each color until the dish is full. Add the red to the blue then the yellow to the blue and so on. Chill for 8 hours or overnight. Then enjoy!

Where Can This Multiplexed Ice Cream be Found Today?

Other companies began to formulate their own recipes after Strohs Brewery introduced Superman Ice Cream to the market. Although the ingredients have changed, there are still many renditions that can be explored:

Is Superman Ice Cream Related with the DC Universe?

It may seem that Superman Ice Cream and DC Universe’s Superman are marketed together, but this is not true. Superman Ice Cream was said to have been invented during prohibition which lasted between 1920 to 1933. The man of steel also known as Superman was created in 1938 by Jerry Siegel.

The ice cream’s name was coined after Superman due to its similar color array to that of Superman’s suit. However, as the Clark Kent’s alias became a licensed entity, ice cream suppliers were discouraged to not sell a product using the Superman name.

Thus, the ice cream had to be penned by pseudonyms like “Super Kid”, “Scooper Hero” and “Superlicious”.

Where Can You Get the Best Tasting Superman Ice Cream?

While you can make a version of Superman Ice Cream at home, there are a few parlors and ice cream shops that will serve you their take on this multi-colored ice cream.

Chocolate Shoppe Ice Cream: Located in Mchenry, Illinois, the name of their red, yellow, and blue ice cream is in fact Superman. However, the flavors found here are cherry, blue moon, and vanilla. Per their website “Meet your new kryptonite… [these flavors] combine forces to bring you one super scoop!”

Whether you in the Detroit, Michigan or you live across the world, you’ll always be able to identify Superman Ice Cream by its twists of red, blue, and yellow colors.