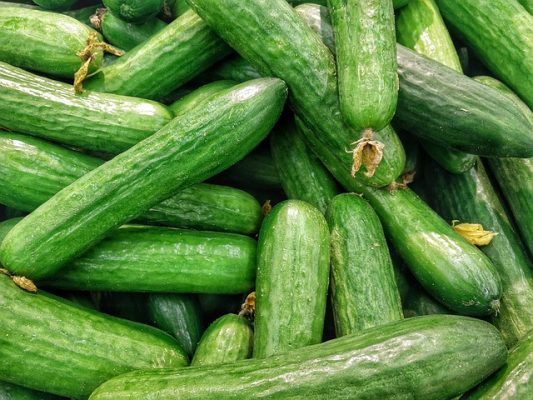 I usually buy cucumbers for my skin. As a matter of fact, I put them on my face way more often than I actually eat them. I used to go to the store frequently to buy small amounts of cucumber as I didn’t know alternative ways of preserving them and I don’t have the patience to make pickles. And then I discovered freezing.

Freezing is perhaps the most common and easiest way of food preservation. It might seem a bit unusual to freeze cucumbers but if you have no time or just too lazy to pickle them (like me), you might as well try putting them in the freezer.

Like most vegetables and fruits, cucumbers may succumb to physical changes under traditional freezing methods. This is because cucumber has a high water-content. (It’s made of 96 percent water to be exact). Because of this, cucumbers lose its crunchiness when frozen.

Can You Freeze Cucumber?

While it may be impossible to preserve all of its original characteristics, you could still manage to prevent it from turning into a sad, green goo and retain most of its nutritional value. The trick is in the preparation.

Other vegetables, such as spinach, require blanching before putting it in the freezer. Cucumbers, on the other hand, need to be put in a brine solution prior to freezing.

This is because old-fashioned freezing will allow ice crystals to form inside the cucumber, which destroys their cell walls and cause them to wither and go mushy.

When cucumbers are soaked in brine, the salt enables it to retain its snap and crunch even after months in the freezer. Aside from preserving its physical characteristics, freezing also aids in maintaining most of the cucumber’s nutritional value, so you can be assured that you’re still getting its good stuff.

When you’re ready to use it, let the cucumbers in brine thaw inside the refrigerator first. Do not defrost it outside of the fridge as bacteria is more likely to thrive in room temperature.

When done properly, cucumbers can last several months in the freezer compared to a week in the fridge. But don’t store it for too long or it might get freeze-burned.

How To Freeze Cucumbers

Packing cucumbers in a brine solution is the key to keep their texture and crispness even after they are frozen. If done properly, you can preserve cucumber slices for several months and have them ready for your salads anytime. Just follow these steps:

It’s pretty easy, right? Remember to thaw the cucumber in brine inside the fridge and not on the counter. And don’t forget to put a label and date your cucumber to keep track of time!

If you’re looking for a quick and easy way to use your frozen cucumber, sometimes a good ol’ cucumber salad is all you need.

In the mood for something foreign? You might want to give this spicy Korean cucumber side dish called oi-muchim a try.

For hot summer days, this cucumber cooler recipe might just be perfect. It has the flavor of cucumber and mint, mixed with lemon juice, and a dash of salt of sugar.

Yes, you can freeze cucumbers and it will last for 4-6 months in the freezer. Here is how to do it: wash and peel them, cut into bite-sized pieces, put them in an air-tight bag, seal tightly (to avoid freezer burn), store properly, and label the bag with today’s date.

How do you plan to freeze your cucumbers? Share your experience with me in the comment below. I am always looking to hear from my readers.