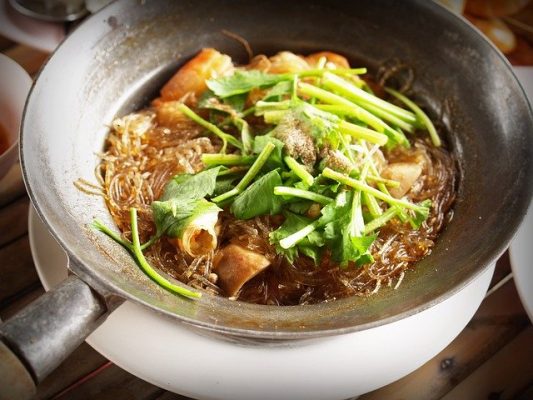 I’m a college student living away from home. Every weekend, my mom brings me a pot of chicken noodle soup. I can’t finish it all at once so is it okay to freeze the soup and eat it later on during the week? For how long can it last in my freezer?

Chicken noodle soups are great for chilly weather. It’s a warm comforting soup commonly served to those who are sick.

If you want to store them for later, you can place your chicken noodle soup in the freezer to preserve it for a couple of days. Noodles become mushy and soggy when placed in the freezer with the soup. Nevertheless, the soup stays tasty and flavorful. An alternative way of freezing the soup is to separate the noodles from the broth soup. This way, you’ll be able to keep the noodles from becoming soggy.

Can You Freeze Chicken Noodle Soup

In thawing the soup, leave it at room temperature for a few minutes to allow the soup to defrost. Then, boil the soup in a pot to reheat. After that, you can now serve the warm and reheated chicken noodle soup.

Another option in reheating the chicken noodle soup is to pour the soup into a microwaveable bowl and heat it using a microwave oven. With the medium heat settings, a few minutes in the microwave oven will do just the trick.

If you decide to freeze the noodles separate from the broth soup, thaw the soup at room temperature and boil it in a pot to reheat. As for the noodles, use a frying pan with a teaspoon of oil to reheat. After the noodles have become soft, place them in the pot of broth.

Through this method of separately freezing the noodles and broth, you can preserve the texture of the noodles. The broth soup will also remain flavorful after reheating.

The chicken noodle soup that is properly stored in airtight containers will stay fresh and frozen for four to six months. Soup that has already been thawed should be consumed immediately and not be put back in the freezer anymore.

How to Freeze Chicken Noodle Soup

Freezing your home-cooked soup is simple. Follow these easy steps to freeze your soup for storage and you can have a week’s worth of soup meals:

On the other hand, if you plan to specifically cook chicken noodle soup for freezing, here are the steps to follow:

When you’re feeling under the weather, cheer up with this classic homemade chicken noodle soup recipe:

Cook your chicken noodle soup from scratch with this recipe. This is a fresh and refreshing way of preparing your soup:

Yes, you can freeze chicken noodle soup. Frozen chicken noodle soups will last for a few days to six months depending on how it is stored and reheated. The noodles may become mushy and soggy when frozen with the broth but they will still taste good. To avoid this, separate the noodles from the broth before freezing to preserve their texture after thawing or reheating. You should also make sure that your soup is cooled down to room temperature before placing it in an airtight container for storage in a freezer where it stays fresh and safe for up to six months.