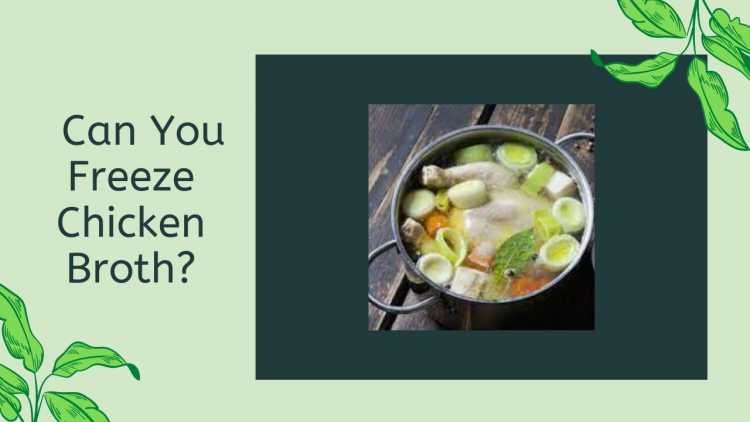 But whether you’re buying one from the grocery or making a tub of chicken broth from scratch, you’ll almost always end up with a ton of leftover stock simply because you can’t get them in small quantities while most recipes only call for a cup or two depending on what you’re cooking up. Luckily, chicken broth or stock are easy to freeze and absolutely safe.

Can You Freeze Chicken Broth?

First off, you can definitely keep broth in the refrigerator, but it will only last for about 4 to 5 days. Freezing gives a solid three months or even more.

Choosing your container is also very important. Don’t store your broth in the metal tin can that it came from. You’ll want to choose something with a lid.

When you freeze your broth, you’ll want to make sure you won’t have leftovers when you thaw them because refreezing and thawing again isn’t safe.

Instead of getting a large tub and popping it into the freezer, you can use ice cube trays, which is about 2 tablespoonful each cube. Once frozen, simply put them in a sealed bag and pop back into the freezer.  If you’ll need larger quantities, you can put two cupful into mason jars.

This way, you won’t have to thaw all your broth at once, and will be able to safely keep the rest for the next day.

You can use either glass or plastic, as long as it’s BPA-free and totally reusable. BPA-free containers are widely available now so finding good ones shouldn’t be a problem.

How to Freeze Chicken Broth

There’s really not much to freezing broth, but there are ways to do it better and make the broth last longer.

When you’ve decided to start using some of your frozen broth, just move it to the refrigerator 24 hours before you’ll use it so it thaws properly.

How To Use Up Extra/Leftover Chicken Broth?

Chicken broth is a staple in many kitchens, and for good reason. It’s versatile, flavorful, and can be used in a variety of dishes. But what do you do when you have extra chicken broth? Here are five delicious ways to use up your leftover chicken broth:

So there you have it – five delicious ways to use up your leftover chicken broth. Next time you find yourself with extra broth, try one of these recipes and enjoy!

Recipes That Use Chicken Broth

Hearty, filling, and perfect to warm your bellies up especially when you’re cold and feeling feverish. Chicken soup is the true panacea for all kinds of illnesses, figuratively speaking.

Easy but sophisticated, perfect for dinner parties. It’s light and savory, but has some kick. The rice also makes the dish really filling.

Gravy is one of mankind’s best inventions because it goes with most things whether it’s fried, roasted or grilled. This recipe has it all – sweetness, saltiness, and the creamy goodness of gravy.

Yes, you can freeze chicken broth. Frozen chicken broth will last for 3 months or even more. Freezing your broth in ice cube trays or mason jars is a great way to keep unused portions fresh. Simply make sure not to fill up containers too high, leave some air space at the top when freezing them overnight before covering them with a lid. If using ice cube trays, move frozen cubes into sealed bags after.