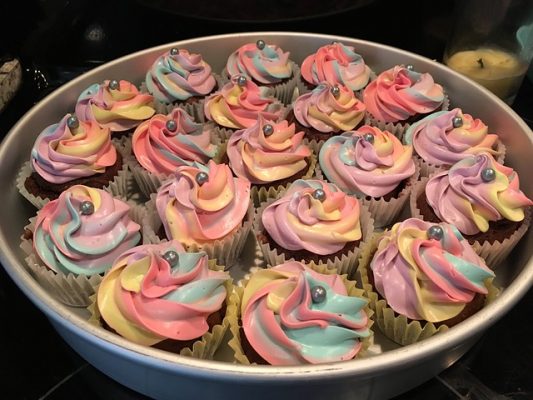 My daughter and I love to bond over baking. We like to experiment in the kitchen. We recently baked red velvet cupcakes and tried different icing. We tried making buttercream frosting. It tastes very good! But we made a lot and now we have a lot of leftover buttercream. We will use some in the next few days but I wonder if we can just freeze the rest.

Buttercream is indeed a delicious, popular, and versatile confectionary essential. You can use it to top, coat, fill, or decorate baked items and other desserts.

You don’t need to worry when you make excess buttercream. Establishments freeze it, so you can do so at home too. Texture changes when you freeze it, but proper thawing makes it ready to use again.

Can You Freeze Buttercream Frosting

Buttercream is essentially fat creamed with sugar. Butter and powdered sugar are used in the traditional recipe. But it is a versatile confectionary. You can replace butter with other fat such as shortening, and add other ingredients such as food color. In the end, you get a creamy mixture, thick enough to hold shape when used as topping or cake decoration.

Buttercream is made up of roughly 2/3 sugar, depending on recipe. This makes it very sweet. Sugar acts as preservative, too. But if you are not using it within a week of making it, then freeze it.

When you freeze buttercream, you preserve the color, flavor, creaminess, and sweetness. It hardens in the freezer though, and takes quite a while to be pliable again.

Just give buttercream enough time to re-soften. You can leave it overnight in the refrigerator or use the defrost setting in the microwave. Be careful not to melt the butter or fat. You can also gradually soften it using a mixer.

While some bakers say it’s okay to leave it in the counter to warm at room temperature, it may not be advisable due to food safety issues.

You can keep buttercream in the freezer for up to 3 months. You can also put it in the refrigerator for 4 to 5 days, in case you will use it a few days after making it.

How to Freeze Buttercream Frosting

Freezing buttercream frosting is as easy as making it.

You can use frozen buttercream to replace fresh one in usual recipes. After defrosting buttercream, you can add coffee concentrate using instant coffee or espresso powder. You can even gradually soften buttercream with the liquid in a mixer. Pipe this frosting on top of mocha cupcakes. If you are not a fan of coffee, you can use chocolate instead or other flavors you like.

Frozen buttercream frosting can also be used to coat cakes. It just takes proper defrosting and proper technique in handling buttercream. You can also add milk or other flavor-rich liquid to turn the frosting into a thinner icing.

Aside from topping and coating, buttercream can also be piped into fancy decorations such as flowers and leaves. These shaped icings are best when frozen. So the next time you have some leftover buttercream, why not pipe them into nice shapes before you freeze them.

Yes, you can freeze buttercream frosting. The easiest way to do it is by preparing the buttercream according to your desired recipe and then packing it in sealed bags for storage. Be sure that when freezing the frosting, you flatten it out before storing it so that you save on space while still getting the maximum volume of product per bag! The texture may change slightly but should return back to normal if thawed properly before use. Make sure to label the date as well so that you know how old they are and don’t accidentally eat something past its prime.