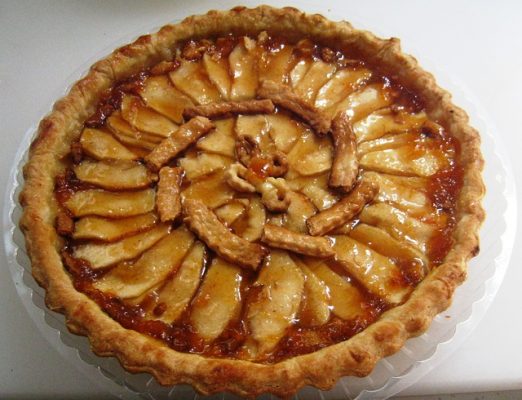 With all the different recipes to prepare, skimping on dessert for the holidays is something that most people have done due to lack of time. The good thing is, you do not have to cram on dessert anymore if you could make them ahead of time and freeze them until the holidays.

Apple pie is a good dessert that freezes well. They could be kept for months in the freezer and could be frozen either baked or unbaked. All you have to do is wrap them well and then toss them into the freezer.

Can You Freeze Apple Pie?

Freezing apple pie is a very convenient way to store them long-term. They could be stored for up to 4 months in the freezer if stored well.

When freezing unbaked apple pies, it is important to freeze them directly after preparing them. The crust might get a little soft when thawed and baked due to the ice crystals that were formed in the freezing process.

It is important to wrap apple pie well before freezing to prevent moisture and other contaminants from seeping into the pie causing quicker spoilage.

You can tell when the apple pie has gone bad if it begins to produce a different smell. Another indicator would be if the crust has become too soggy because it has absorbed the water released by its filling.

It is suggested to thaw baked apple pies by putting them in room temperature and then reheating them in the oven.

When thawing unbaked apple pies, it would be better to thaw them in the oven instead of exposing them to room temperature.

How to Freeze Apple Pie

Apple pie freezes well whether baked or unbaked. It’s a quick and hassle-free process that would preserve the pie for quite a long time.

Add a twist to your regular apple pie by adding some caramel into the dish. Here’s how you do it:

These apple hand pies would make a great snack. It would also make you feel like every day is a holiday! Find the recipe here:

Got some leftover crust from making pies? Turn them into cookies! Check out the recipe here:

The only way to extend the shelf-life of a baked apple pie is by putting it in your freezer. Freezing them will make sure they last up to 4 months. When you freeze you won’t have any issues with spoilage from moisture or other contaminants if you have packed the apple pie properly. If you want more information on how this process works, please leave a comment below!